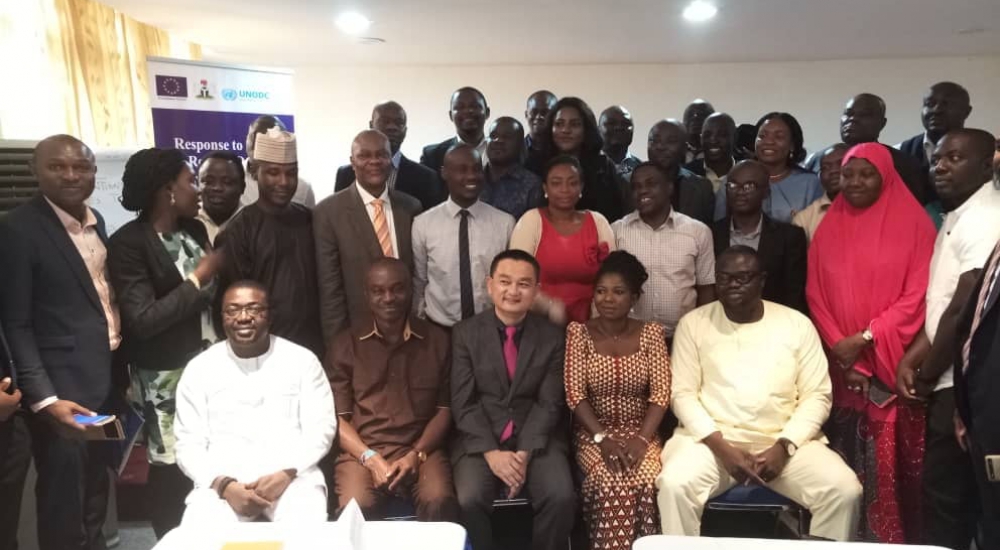 The United Nations Office on Drugs and Crime (UNODC) has initiated a partnership with Nigeria’s pro bono lawyers to offer legal aid services to drug arrestees. The initiative got off the ground early September in Abuja following a 3 day sensitization programme anchored by the UNODC to acquaint the lawyers with the nuances of the drug control debacle and 1 day meeting of the pro bono lawyers.

The initiative became imperative when it was realized that most of the indigent drug arrestees were languishing in detention without any hope of legal representation. Nigeria’s Legal Aid Act 2011 as well as the National Legal Aid Strategy (2017-2022) do not accord coverage to drug arrestees, thereby exposing them to prolonged detention in overcrowded prisons and often without access to court for long periods.

Worried by this state of affairs, UNODC is implementing a large-scale project titled “Response to Drugs and Related Organized Crime in Nigeria.” The programme is aimed at supporting Nigeria’s efforts in fighting drug production, trafficking and use, and in curbing related organized crime.

Funded by the European Union (EU), the initiative proposes a balanced approach to drug control, with equal attention paid to drug interdiction and drug demand reduction, including drug prevention, treatment and care (DPTC).

According to Mr. Glen Prichard, UNODC’s Project Coordinator for the programme, the objectives of the intervention which commenced in 2013 are to support evidence-based policy formulation and improve legislation and coordination; improve law enforcement capacity in drug control and tackling of organised drug-related crimes, and to enhance drug prevention, treatment and care services.

The desired outcomes of the programme, held in collaborationwith the EU and Federal Government to galvanize Nigerian lawyers towards tackling the legal hiccups that bedevil drug use, include improving the information and evidence on drug use, drug crime and impact and using same for policy and programming; enhancing technical and operational capacity in front-line agencies, leading to targeted interventions on drugs/organized crime and improvement in internal scrutiny processes, and improving the capacity to manage drug treatment/rehabilitation and prevention through the creation of a network of quality drug treatment service providers.

LARDI is a network of pro bono lawyers to be deployed to provide free legal services to drug arrestees.

Some films relating to drug trafficking and drug use were screened by the organisers while the highly interactive forum also witnessed question-andanswer sessions as well as activities.

The inaugural meeting of the network, which was anchored by Prichard with assistance from Wu, held on the last day of the programme with the election of officers to pilot the affairs of the association.

Aside from the photo sessions which were also a part of the event, most of the lawyers were of the view that the workshop was a major eye-opener that has fundamentally altered their perceptions on the plight of Nigeria’s drug users and the challenges they face in the hand of law enforcement agencies.

The UNODC (2015) report estimates that drug-related income for trafficking ranges between US$ 426 billion and 652 billion (2014). Though Nigeria lacks reliable and comprehensive data on the prevalence of drug use, substances used and the number of people with drug disorders, the country is piloting a National Epidemiological Network on Drug Use (NENDU, 2015) survey in 11 treatment centres under the “Response to Drugs and Related Organized Crime in Nigeria” programme. This provides drug treatment data for Nigeria. Between January and December 2015, 1044 patients entered for treatment in Nigeria in the 11 treatment centres that are currently part of the NENDU reporting system. The drug declared the most frequently used by the patients entering treatment are cannabis (36.2%), followed by opiates (28.3%) and alcohol (17.1%).

Among the different substances declared as "others", 79% are cigarettes/tobacco. The opiates concerned by the entry into treatment are mainly prescription medicines: tramadol (71% of opiates as the most frequently used substance and specified), codeine (15.1%) and pentazocine (9.9%).